More of the same with a side of bug trouble

Although the part-robot, all gentleman, Sir Hammerlock gets his name above the door in this beast hunting DLC package he barely features throughout. Sure, he provides some of the missions and comical quips as you lay waste to wave after wave of colourful nut jobs, but Hammerlock is a mere passenger. The star of the show here is Professor Nakayama, but we’ll explore his madness later.

The premise is this: Sir Hammerlock invites you to the Hunter’s Grotto deep in the valley of Aergus to help him track down some giant beasts. First thing of note is that it’s relatively short. Focus on the main missions and you’ll fly through the story in about two hours. But like the finest filet mignon, there’s barely any fat to get in the way so you can get enjoy the small yet delicious main course.

Unlike the majority of Pandora’s brightly coloured areas, this new location is dark and dreary with rain-soaked cliffs and dank caves to punctuate your travels. To get you around there’s a nifty little hovercraft. It comes with three flavours of cannon – electric, acid and flamethrower – and handle exactly the same as the Catch-A-Ride vehicles. You can even crash your way around on land too.

You’re faced with a lot of new threats in Aergus. The tribal savages that attack with swords and spears are robust and will really test your strafe and shoot skills as they charge in at you. They’re lead by various witch doctors that, who are identified by their huge wood carved frame and staff of power. Not only can they heal their minions, but they can turn into whirlwinds, vampire bats or the crippler version will even suck you into their clutches with a tractor beam skill. They’re quite possibly the most dangerous tribe in Borderlands 2.

Bigger beasts come in the form of Wetland Drifters, which are like the dainty limbed Striders from Half Life 2, but more dangerous. The first time they rear their towering frame from a swamp will have you reaching for your rocket launcher in a panic. Tank-like Boroks attack in packs and can leap great distances like the Bullymongs. And Scaylions that are essentially massive scorpions with armour-piercing tails will also test that trigger finger. But the spookiest of all the new enemies are the Giant Spores.

They make a really awful screeching sound, but will leave you be so long as you don’t attack them first. But like all flying foes in shooters, they can be a right ballache to get rid of if you engage them, because as far as fat, grotesque creatures go they’re pretty nimble.

Your main tasks in Big Game Hunt are varied enough so you don’t feel fatigued. Trap a special Borok in a cage so that a documentary film maker can record the footage. Track a large beast using its footprints before an almighty showdown. Or clean the urine stains off various appliances for the returning Claptrap. The main event, your pursuit of universe’s most deadly prey – man – is easily the showstopper and highlights Borderlands 2 great humour.

Professor Nakayama is a man with a plan. He’s found a way to clone the evil boss of the main game, Handsome Jack, and bring him back to rule the galaxy once more. And he’s going to take down the Vault Hunters in the process. Or at least he would was he not such a sniveling coward. Nakayama coaxes you into battle, but he’s not really sure how he’s going to defeat you. As you get closer to the finale his desperation becomes clear as he sends out his ‘best’ men and beasts. The build up is perfect and Nakayama battle might be the finest send-off in Borderlands 2, but we won’t spoil it for you.

Although it’s living in the same world, Big Game Hunt feels more buggy than ever. We came across clipping issues that snagged us on easy to climb rocks a number of times. Enemies that are half on the land and half submerged. And a few instances where the texture models simply didn’t arrive on a beast and we ended up fighting what looked like a shadow. Oh, and there was even a moment where part of a mission couldn’t be completed because the item never appeared. Slightly shoddy from Gearbox, considering the excellence of the other packs but it’s still playable.

Big Game Hunt delivers more of the magic that you expect from Borderlands 2. The sprawling landscapes, varied missions and cannon fodder on offer will more than quench your thirst for more action and the plot, though pretty short, will provide the giggles along the way. It’s not the best DLC pack from Borderlands 2, but it certainly delivers more of the same goodness. 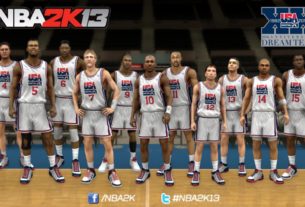