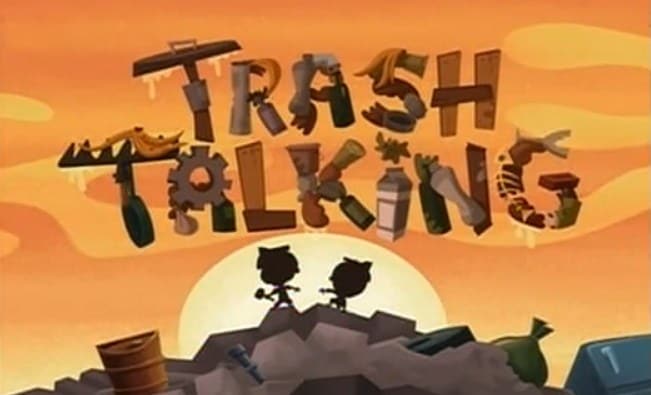 Inoffensive Trash Talking #2: “You don’t even go to a real school”

If it’s not a real school then it must be a pretend one. Imaginary. So that could be anything. Like a school where the teachers are all cute talking animals like bear cubs and they’re just up for having a good laugh and they wear funny hats and lessons don’t even exist because knowledge assimiliation is achieved by eating delicious Indian food and drinking delicious ice cold lagers. And everyone has a jetpack. That would be better than real school.

Inoffensive Trash Talking #3: “My cock’s bigger than your leg”

Unless the insinuation here is that the recipient of this anatomically bewildering put-down has a leg smaller than a penis, then the trash talker is somehow under the misguided impression that having a penis dimensionally superior to a leg is somehow a good thing. A good manly thing to be proud of. But stop to consider the implications of having a penis bigger than a leg. Not practical. Not attractive. Not conducive to a healthy life. If anything, engorgement of such an oversized phallus could lead to cardiopulmonary arrest. And then you’d be dead because of having a stupidly massive cock. You stupid massive cock.

Admittedly, having a girlfriend with head frontage resembling a pile of lumpy dairy curd wouldn’t be anything to hang on the wall, but as far as deragatory provocation goes, it doesn’t get much more blandly inoffensive than cottage cheese. Within cheese circles cottage cheese is widely regarded as the most unobjectionable of all milk-based food products. An over-ripe Camembert might be considered offensive, while a fully rotten casu marzu alive with cheese fly larvae would undoubtedly turn a stomach or two. But cottage cheese? Not likely.

Inoffensive Trash Talking #5: “You can’t even make an omelette”

Another odd food reference. The omelette is certainly an easy dish to create, requiring only a rudimentary level of culinary knowledge/skill. It’s basically: smash eggs together, introduce to pan, add optional other food stuff (like cheese), fold. And you’re done. Chances are anyone possessing the necessary cognitive capacity to operate an Xbox controller should have the requisite mental ability for omelette production. With this in mind, attempting to insult someone by implying some sort of egg-crafting disability isn’t logical and smacks of desperation to find fault or weakness in a person when none is apparent. So if someone attempts to offend by proposing omelette retardation, it’s only because you’re shit hot at everything else.

Inoffensive Trash Talking #6: “I bet you don’t have a girlfriend either. You’re as lonely as the rest of us”

And we’ll leave it on that highnote. If you hear any inoffensive trash talking while you’re doing games and stuff online, hey, that’s great – be sure to tell your friends! Fucking awesome, now go follow Shoot The Barrel on Twitter.